Busy stitching note books for the 2017 Steampunk Asylum at Lincoln. And now I have a lovely new research project! Weaselling references to notebooks in late Victorian literature.

Here, from Jules Verne, A Journey to the Centre of the Earth (version 1864): we learn that Professor Lidenbrock keeps notes, very precisely, in his notebook:

'my uncle drew from his pocket a small notebook, intended for scientific observations. He consulted his instruments, and recorded: Monday, July 1. Chronometer, 8.17 a.m.; barometer, 297 in.; thermometer, 6° (43°F.). Direction, E.S.E.'

Axel, his nephew, and a traveller on the journey into the earth, is also a wonderfully attentive notemaker:

'I took out my notebook, from which under the most desperate circumstances I never parted'

I want to get hold of these notebooks, so I can read the jottings such as the calculations of their depth into the earth:

"Calculate away, my boy."
"Nothing easier," said I, pulling out my notebook and pencil. "Nine times one hundred and twenty-five feet make a depth of eleven hundred and twenty-five feet."
"Archimedes could not have spoken more geometrically."
"Well?"
"Well, according to my observations, we are at least ten thousand feet below the level of the sea."

Now, who wouldn't want to hold a notebook composed on a journey to the centre of the earth? 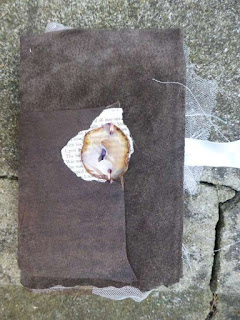